Star Wars has a special place in my heart. To this day, I love the scene of Yoda lifting up Luke’s X-Wing through only his force. To me, it signifies not underestimating anyone’s abilities. It’s not hard to tell that Yoda is one of my favorite characters. In fact, Yoda’s quotes for entrepreneurs help me stay motivated to this day!

That’s right. A lot of what the grandmaster says in the Star Wars universe is applicable to people with an entrepreneurial mindset. Why? Because his quotes, while simple, are very inspirational and can possibly change the lives of many.

In a world where, as per the Office of Advocacy, over 22 percent of startups fail after the first year, inspirational quotes are sometimes the only way to see the light at the end of the dark tunnel.

Therefore, I thought, why not discuss some of the amazing quotes by Yoda and how these quotes can help one become a better leader in his organization instead of being a boss or a manager. Considering the recent upsurge in interest in Yoda (baby Yoda to be exact), there is no better time to reiterate the wise words of the character.

Yoda’s quotes for entrepreneurs to unearth the leader within

If you are an entrepreneur or a CEO of a company or startup, one of the first things you neeyour d to learn is not to be a boss but to be a leader. This is because the boss gives instructions, whereas the leader leads the team. Boss goes for tried and tested formulas, whereas leader tends to go for calculated risks to set a new mark in the game.

Think of all the people who have changed the world markets. Whether it be Steve Jobs or Jeff Bezoz, they were able to build companies out of virtually nothing because of their vision and leadership abilities.

Now, there are a plethora of things that Yoda says which are impactful and revolutionary for entrepreneurs trying to become leaders. I have narrowed it down to my favorite picks. These are the Yoda’s quotes for entrepreneurs that helped me in becoming a better leader right from the early days of my career.

“Always pass on what you have learned.”

In the world of business management, a term is often used called “succession planning.” This refers to the company’s effort of developing new talent to one day take the place of the old leader. Yet, according to ATD’s research report, only 35 percent of companies have proper succession planning strategies.

For the long term success of a company, a leader must think ahead of time and pass on their skillsets and information within the organization.  This is not only a piece of advice but an attitude that makes one a leader.

I have worked under multiple banners as a consultant and sit with more than two dozen managers; one thing that I have extracted out of these meeting is that if you are a leader, you will look at the bigger picture and teach others what you have learned over the period of time so that you can help them progress better.

Apart from training the future leaders of the company, passing down information can help ensure that your team doesn’t make the same mistakes all over again. Leaders always prefer passing on what they have learned so that their team can save time and focus on doing something new, which at the end of the day will benefit your company and you.

“Patience you must have my young padawan” 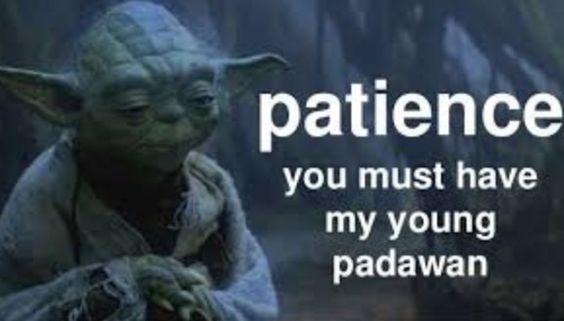 Among Yoda’s quotes for entrepreneurs, this one gives me the most hope and motivation. This is because hurdles are synonymous with the word startup. Remember, no matter how hardcore your plan is, you will end up facing situations that you might not have calculated before.

Business life might sound like a glam, especially if you have read stories of people who got success overnight just because their idea was different and digestible for the audience. The reality is that at the back of this glam world, there are lots of perks and peeves!

In fact, a lot of times, the struggles of entrepreneurs who make it big are glossed over. You only hear about the good side.

For instance, did you know that Elon Musk was once rejected from a position at Netscape and was later ousted from his own company (Zip2)? Even though he made it to the moon today, there were many trials that ended badly before that!

Unless you have the patience to withstand against the bad times, you will probably give up before the good days arrive. As a leader, this quote will help you in your worst times. You have to have patience in order to face and deal with the situations in such a way that you get out of them accordingly.

“The fear of loss is a path to the Dark Side.”

Risk is a given in the world of business. To name a few, at all times, entrepreneurs face financial risk, , reputational risk, environmental risk, and the risk of bankruptcy.

Since risks are unavoidable, entrepreneurs must not be afraid of them. Instead, a good leader is one who knows how to take calculated risk in order to set new marks in the game, whereas bosses prefer to stick to tried and tested techniques.

I am not saying sticking up to tried and tested formula is a bad idea, but if you are going to go by the book, you are only going to get what the book says or even a bit less but what if you understand the situation, do your math and go for something new and out of the box. This might sound risky, but if the calculations are right, you can hit a new mark in the game, and this is exactly what big businesses do. They set records instead of chasing them.

Unless you try to expand your horizon and test the unknown, there is no way to know how far you can go. So, the fear of getting the short end of the stick will stop your company from growing.

While you are at it, it is always a good idea to be mentally prepared for losses. For instance, recently, WhatsApp experienced a reputational risk with its new Terms and Conditions. The company reacted by clarifying its position and retrieving the policy when the backlash continued.

Some may argue that had the company not taken this risk, they would have been better off. But, through this risk, they were able to gauge public sentiments, which is likely to help their policy development in the future.

“If no mistake have you made, yet losing you are … a different game you should play”

I’ll be honest with you; among all of Yoda’s quotes for entrepreneurs, this one was the hardest for me to accept. And I am sure this is the case with most of you. After all, it is just so hard to admit that you are wrong about an idea and give up.

But, there is a real strength in knowing when something is not working. In an extreme case, this can refer to a business idea. But, it can also mean the method you are using to solve a problem.

One must avoid doing the same stuff repeatedly and expecting a different result. As discussed above, if you are a leader, you will face the problem and find a different solution to the problem each time. Leaders are never scared of experimenting and finding solutions to problems. And leaders are never afraid of admitting they are wrong.

Failure to innovate and take new paths can be detrimental for businesses. For instance, while once a leader, Nokia is now nowhere to be found in the top league because it didn’t adapt to the changing trends. You wouldn’t want your business to go the same way.

“So certain are you? Always with you, it cannot be done. Hear you nothing that I say?”

If I have to explain this quote in one sentence, I will say this to all those passive mindsets in businesses who always believe that certain things are impossible to do until some set an example for them.

What was the cellphone before Apple? A screen and number pad attached to it, no one could have imagined the possibility of a button-less phone. Apple did that, and it was not a change; it was a revolution in the world of communication. Apple became the first actual smartphone, and until today, no one has beaten Apple because of what they have done in the cell phone industry.

Steve Jobs had the vision and a positive mindset that took the cellphone industry to a new height. If you are a true leader, you need to have such a vision, or else you are nothing.

Just like Steve Jobs, don’t wait for someone to do something out of the box. Instead, be the leader and attain the first-mover advantage. All great ideas are dubbed to be “too crazy.” And had visionaries believed in the word impossible, we wouldn’t be living in a world with self-driven cars, on-demand streaming, and virtual assistants!

Listen to the Jedi Master Entrepreneurship is not easy as many think it is, and there are times when you actually lose your faith in yourself. These Yoda quotes are actually amazing for entrepreneurs of all ages as this will keep them motivated towards the goal, which is success. May the force be with you!